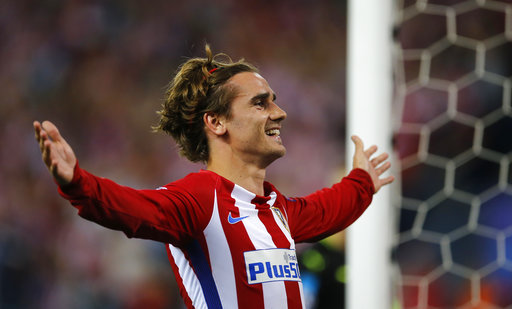 MADRID (AP) — A closer look at Atletico Madrid ahead of its Champions League semifinal against Real Madrid on Tuesday.

SEASON SO FAR: It’s been a disappointing season for Atletico if compared to a year ago, when it contended for both the European title and the Spanish league trophy.

Diego Simeone’s team is already out of the title race in La Liga, but Atletico could still end up with what would be considered its best season ever if it finds a way to win the Champions League title for the first time.

Triumph in Europe’s top club competition would be historic for the team considered the third force in Spanish soccer, and would categorically establish Atletico as a top contender in European soccer.

The disappointments of its up-and-down season would certainly be forgotten if Atletico brings home the Champions League trophy after two close calls in the last three seasons. It endured heart-breaking losses to Madrid in the final both in 2014 and 2016, and it also was eliminated by the city rival in the 2015 quarterfinals.

Atletico is still fighting for third place in the Spanish league, but its focus is solely on getting revenge against its crosstown opponent and getting another shot at the European title.

The team lost valuable points early in the Spanish league when Simeone experimented with different formations to make his team more offensive, but the changes also destabilized its once impenetrable defense.

The coach found the right balance again entering the decisive stretch, keeping the team unbeaten in 11 games while conceding only four goals in its last 12 matches in all competitions.

The France forward remains the most important player for Atletico on offense, being responsible for nearly all of its attack.

He continues to be decisive despite the addition of countryman Kevin Gameiro, who has not been consistent since arriving in the beginning of the season.

Griezmann is Atletico’s top scorer with 25 goals in all competitions, nine more than Gameiro.

The 26-year-old Griezmann will be looking for redemption after missing a penalty kick in regulation of last year’s final against Madrid, when Atletico eventually lost in a penalty shootout.

Godin is the heart of Atletico’s stout defense and remains one of its top leaders on and off the field.

He is a key piece in Simeone’s defense and is also a big a threat on offense. The Uruguayan central defender is a specialist on set pieces, having scored many important goals for Atletico throughout his career, including one in the 2014 Champions League final against Madrid.

The 31-year-old Godin has been dealing with injuries this season, however, including a muscle ailment that left him out of the squad entering the final stretch.

The Slovenian goalkeeper will have to be at his best to stop Madrid’s high-scoring attack led by Cristiano Ronaldo.

He has been able to keep clean sheets in recent matches, but will be under added pressure in the semifinals because of Atletico’s depleted defense which is missing injured players such as Juanfran Torres, Jose Gimenez and Sime Vrsaljko.

The 24-year-old Oblak missed several games this season because of a shoulder injury that required surgery in December.

Simeone revitalized Atletico after taking over the club in 2012, turning it into a contender both in Spain and Europe. He already led Atletico to the Spanish league title in 2014, but is still missing the European trophy.

With a focus on tough defending and effective counterattacking, Simeone has kept Atletico competitive against top clubs and in position to win big titles.

The 47-year-old former defensive midfielder for Argentina has maintained a “match by match” mentality that resonates well with his players and continues to yield good results.

He is now looking to win the Champions League to show that the team’s recent successes were not a fluke.