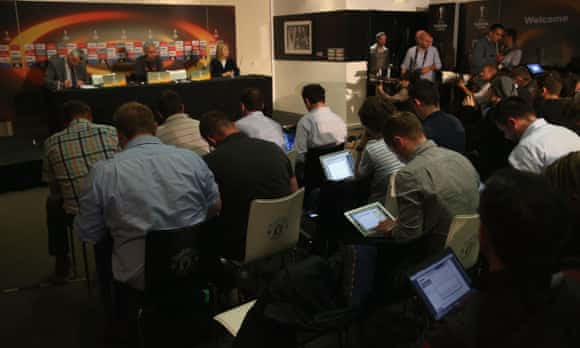 The Fiver is not usually one to look a gift horse in the mouth, not least because gawping at horses’ mouths is a creepy habit unless you’re a dentist checking for damage done by an angry Newcastle fan. But this morning The Fiver had a long, hard stare down the throat of a prize donkey and decided that no, it would not ridicule José Mourinho for declaring their Big Vase semi-final second leg against Celta Vigo to be the biggest match in Manchester United’s history.

It’s not that we’ve elected to go easy on him, on the grounds that he’s had a lot to put up with this season – Einsteins constantly demanding food; knacks that have at times reduced his squad to just 22 full internationals; philistine opponents refusing to observe the tradition of rolling over at Old Trafford. No, the reason the Fiver isn’t force-feeding Mourinho a large serving of the Haggis of Unpalatable Truths is that we know he was just trying to motivate his players. And he was doing that precisely because he does, in fact, have a very keen grasp of history. He can, for instance, talk at considerable length about the time he created the world in seven days. And don’t get him started on the time he saw mankind invent fire, to which he immediately reacted by inventing the fire extinguisher.

Most relevantly, Mourinho has a deep knowledge of football history and, therefore, he knows that, since its very inception, Big Vase has had a tendency to slap the smug faces of English teams who thought they’d already got the job done by winning away to puny foreign outfits. The first Big Vase may be remembered mostly in Britain for Wolves boshing Spurs in the final, Dundee’s sensational comeback against Cologne or Aberdeen spanking Celta Vigo, but the Special One is also aware of that year’s meeting between Dirty Leeds and Lierse.

Don Revie’s team won the away leg 2-0, seemingly giving themselves an even plusher cushion than the 1-0 victory that Mourinho’s team managed to restrict themselves to last week in Vigo. “Even with so many of their players out injured I do not think we can expect to beat them,” sobbed the Lierse manager, Frank de Munck, before the second leg back in the day and before, many years later, his distant English cousin became the current Elland Road boss. “We will do our very best but I think we will have to be satisfied if we can avoid a very heavy defeat,” added De Munck. Lierse won 4-0. Imagine being dumped out of Big Vase at home by Belgian nobodies! That wouldn’t happen these days, not even to Tottenh … ah. As you were.

Mourinho, in short, is happy to talk up Thursday’s match if it ensures his team do not lapse into complacency and throw away their first-leg lead. He also knows that freakish things tend to happen in threes. So United’s knack-ravaged defence will have to keep a particularly sharp eye on Liverpool cast-off Iago Aspas, what with Joe Allen and Fabio Borini already having scored at Old Trafford this season. Most of all, Mourinho knows that winning an actual trophy is a much more satisfying way to reach Big Cup than by finishing second, third or fourth in the Premier League. That is not to say that United have been anything other than a boring disgrace in the Premier League this season, merely that Mourinho has been right to concentrate on Big Vase once he realised he was not able to guide the most expensive squad in history above teams whose first-choice defences include Victor Moses, James Milner and Jesús Navas.

All told, it is quite nice that Mourinho has come to the realisation that bigging up Big Vase is part of trying to return Manchester United to their former glory. The Fiver has a lot of time for anyone who attempts to give lustre to derided old institutions that have seen better days.