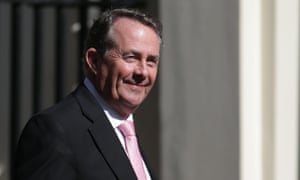 Liam Fox, the international trade secretary, has claimed the BBC would rather see Britain fail than Brexit succeed, making him the second Eurosceptic cabinet minister to attack the broadcaster for its coverage of the UK’s departure from the EU.

Fox, who unsuccessfully stood for the leadership of the Conservative party last year, made the comments in response to concerns from Tory MP Nigel Evans that negative media coverage was undermining efforts to make trade deals with non-EU countries.

Speaking in the House of Commons, Fox said: “It does appear that some elements of our media would rather see Britain fail than see Brexit succeed. I cannot recall a single time in recent times when I have seen good economic news that the BBC didn’t describe as ‘despite Brexit’.”

His comments came after Andrea Leadsom, the leader of the House of Commons, called for broadcasters to be “a bit patriotic” about Brexit during an interview with BBC Newsnight last month.

Labour veteran Barry Sheerman branded Fox’s intervention a “silly attack” on the BBC, and called for the minister to resign amid claims he had lost the confidence of manufacturers for “living in cloud cuckoo land” over Britain’s future.

Alistair Carmichael, the Liberal Democrat chief whip, went on to describe Fox as “Donald Trump without the perma-tan” as he accused him of trying to shift attention away from his own department’s record.

“A government minister attacking the media in this way is a dangerous and misplaced intervention,” Carmichael said. “Mr Fox should get on with the work of government rather than trying to deflect from the failings of his department. It is extraordinary that Mr Fox feels it is appropriate to attack the media. He looks like Donald Trump without the perma-tan.

“He may, of course, be trying to distract us from the official data today that shows the number of jobs created by foreign investment fell by 9% last year.”

Later, Theresa May’s official spokesman distanced the prime minister from Fox’s remarks, while stressing the freedom of the media. “It’s a matter for newspapers, broadcasters and others to determine the tone and content of their own coverage,” the spokesman said.

He added: “The prime minister has always been clear on the need to have a free press and free media in this country.”

The BBC is bound by its royal charter and agreement to be impartial, but Conservative rightwingers have long claimed the corporation is dominated by leftwingers, leading to politically biased coverage.

In fact, a number of high-profile BBC journalists have made the leap into Conservative politics, including Craig Oliver, David Cameron’s ex-director of communications, who was a former editor of the News at Ten, and Thea Rogers, a BBC producer for the political editor, who became George Osborne’s chief of staff.

More recently, two BBC journalists have been in the running for the current top job in No 10 communications. Robbie Gibb, who heads the BBC’s operations at Westminster, is one of the favourites, while James Landale, the diplomatic editor and former deputy political editor, was approached but decided not to apply.