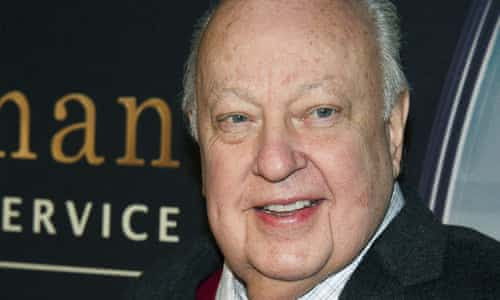 Roger Ailes, the controversial, visionary founder of Fox News who was forced out of the company amid a sexual harassment scandal, has died aged 77.

Ailes, a former presidential adviser, joined the network in 1996, building it into the major conservative force in American politics, a profits powerhouse for Rupert Murdoch’s 21st Century Fox and a company now mired in scandal.

“I am profoundly sad and heartbroken to report that my husband, Roger Ailes, passed away this morning,” said his wife, Elizabeth Ailes, in a statement published on the Drudge Report.

“Roger was a loving husband to me, to his son Zachary, and a loyal friend to many. He was also a patriot, profoundly grateful to live in a country that gave him so much opportunity to work hard, to rise – and to give back.”

Palm Beach county medical examiner’s office said Ailes died of a subdural hematoma — or bleeding on the brain — caused by an earlier fall in the bathroom of his Florida home. The death has been ruled accidental.

Arguably no contemporary figure has shaped media and politics as profoundly as Ailes. A successful local TV producer who went on to become a key adviser to a succession of Republican presidents, he jumped at the chance to lead Fox News when the service was launched in 1996.

In a statement, Murdoch called Ailes a “brilliant broadcaster”. He said: “Roger and I shared a big idea which he executed in a way no one else could have. In addition, Roger was a great patriot who never ceased fighting for his beliefs. At 21st Century Fox we will always be enormously grateful for the great business he built. Our thoughts and prayers are with his wife Elizabeth and son Zachary.”

Ailes advised presidents Ronald Reagan and Richard Nixon, with whom he once plotted to bring Republican news to television. After his exit from Fox last year he was briefly an adviser to Donald Trump’s election campaign.

President George HW Bush was among those who paid tribute on twitter.

David Folkenflik, NPR’s media correspondent and author of Murdoch’s World: The Last of the Old Media Empires, called Ailes a “a towering and twisty figure with a very complicated legacy”.

Ailes’s “intentional collision of politics and TV” redefined broadcast journalism. He “had a willful disregard of where lines should be drawn,” and he “denigrated the work of others in the same field”, Folkenflik said. There has been real journalism at Fox News, he said, “but that was never the point of the network”.

“Ailes provided the mirror for the distorted image that many conservatives had of how the mainstream media worked. This was enormously successful financially; it was enormously successful at morphing Republican party politics. His successes allowed for his excesses. … You cannot understand this scandal [that led to his ousting] without understanding the paranoid and punitive atmosphere he created inside Fox News,” said Folkenflik.

His shocking departure from Fox News in July 2016, after two decades of leadership, signaled the end of an era for the network, which has been in turmoil ever since.

Ailes was forced out following allegations that he sexually harassed employees including the former host Gretchen Carlson, who alleged in a lawsuit that Ailes fired her after she refused to have sex with him. She worked at the network for 11 years, and said during that time, Ailes subjected her to “severe and pervasive sexual harassment”.

He denied all allegations.

Ailes reportedly received a $40m payout for his departure and was to remain as a consultant to the network through 2018.

The departure of Ailes was followed later by that of his star presenter Bill O’Reilly, also forced out over claims of sexual harassment, which he denies.

Douglas Wigdor, a lawyer representing 21 alleged victims of racial and sexual harassment at 21st Century Fox, said that Ailes’ passing would not affect the legal process.

“In terms of our cases, I don’t see his sudden passing having any impact as, to the extent relevant, our clients will still be able to testify about his conduct, which presumably will be more difficult for Fox News to counter given that his testimony was not secured by sworn testimony to date.”

The harassment scandal cast a shadow over Murdoch’s £11.7bn takeover bid for Sky, the British television network. His attempt to acquire Sky in 2011 was thwarted amid the phone hacking scandal.

Wigdor travelled to London last week to meet with the British media regulator, Ofcom, which is investigating whether Murdoch and 21st Century Fox are “fit and proper” owners of Sky.

Wigdor said that Ofcom could only properly consider the company’s fitness if Fox waived gagging orders on victims and allowed them to speak to the UK media regulator.

“Many people out there would say that he saved this country by starting the Fox News channel,” said the Fox and Friends co-host Ainsley Earhardt, who cried as she paid tribute to Ailes.

“Roger gave every single one of us on this couch an opportunity. He put food on our table, and you know, he went out in such a sad way – but who doesn’t have sins? We all have our sins, we all have our cross to bear, and Roger, I will love you forever.”

Shortly after Ailes’s death was announced, the Fox News host Bill Hemmer said: “This is not an easy day.”

Hemmer, with his co-host Shannon Bream, discussed how much Ailes “loved this country” and recalled how Ailes would invite Fox News employees to his house in the Hudson Valley. “And we would stand and salute the flag, and that is how the evenings began at Roger’s house,” he said.

Login with your Social ID