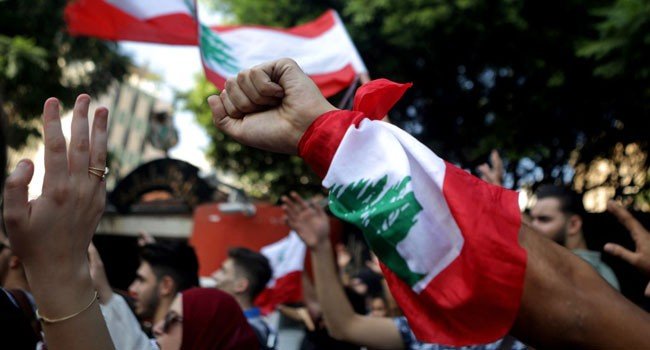 Lebanon has since October 17 been gripped by massive cross-sectarian protests demanding a complete revamping of a political system they say is corrupt and inept.

With youth unemployment running at over 30 per cent, school students have joined en masse since Wednesday demanding a better country so they don’t have to emigrate.

In Beirut, a teenage student who gave her name as Qamar was among thousands of pupils chanting slogans outside the ministry of education on Friday.

“So what if we lose a school year compared to our entire future?” she said. “I don’t want to study in Lebanon and then have to travel abroad” to find a job.

Around her, students waved red-green-and-white Lebanese flags, as others set off yellow, green, blue and purple flares into the sky.

“We missed classes to kick your asses,” read one poster in English.

Another poster in rhyming Arabic said: “No studying or teaching, until the president falls.”

Across Lebanon, students protested outside state institutions and banks including in the southern city of Saida, Tripoli in the north and the east’s Baalbek.

What started as a spontaneous and leaderless movement has become more organised in recent days, with protesters targeting institutions viewed as particularly inefficient or corrupt.

Early Friday, dozens of activists and retired army officers for the first time briefly closed down the entrance to Beirut’s port.

Among them, music producer Zeid Hamdan, 43, had come to denounce what he viewed as a customs collection system riddled with corruption.

“As a musician whenever I bring an instrument into the country, I pay 40 per cent of it” to customs, he said, sporting a light beard and wearing sunglasses.

“It stays stuck in the port for weeks. You need connections, to bribe everybody to get it out,” he said.

Lebanon’s cabinet stepped down last week but no official consultations have started on forming a new government, and outgoing premier Saad Hariri remains in a caretaker capacity.

The World Bank has urged Lebanon to form a new government quickly, warning of the threat of a further economic downturn in a country where almost a third of the population lives in poverty