President Buhari addressed the troops on Saturday at the Umar Musa Airport in Katsina State before leaving for Abuja.

He told the troops, which were deployed to curb the activities of bandits and criminals in Zamfara and neighbouring states under Operations Sharan Daji and Diran Mikiya, that he was pleased with their performance adding that Nigerians deserved to live in peace.

Read More Cristiano Ronaldo made a winning home debut for Italian champions Juventus with Miralem Pjanic and Mario Mandzukic scoring in a 2-0 win over Lazio on Saturday.

He then tasked them to deal with any armed robber, cattle rustler and bandit as ruthlessly as humanly possible.

“I am here and pleased at this opportunity to address you and express my pleasure and happiness as your Commander-in-Chief on your performance on the two respective operations.

‘‘Nigerians are looking up to you and us to secure the country. What is happening in the areas of operations are disgraceful. I’m very pleased with the way officers and men are firmly putting it down and I want you to be as ruthless as humanly possible. Nigerians deserve some peace.

‘‘The country has to be secured to be managed. We have been doing our best and we depend a lot on you to do what is needed in the field. I do not want you to spare any cattle rustler, armed robber or any person who thinks he is above the law,” he said.

The president reminded the troops that his administration had at inception pledged to provide security, enhance the economy and fight corruption.

He, however, commended the troops for the display of gallantry in the field of operations in Zamfara, Kaduna and some parts of Katsina state. 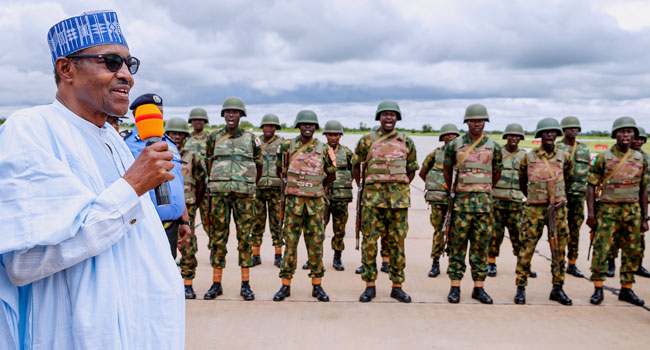