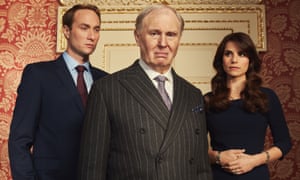 Featuring the Queen’s death, the ghost of Diana, Princess of Wales, and a full-blown constitutional crisis, a new drama from the normally deferential BBC is not for the faint-hearted. Nor, it seems, for actors harbouring a quiet ambition of one day appearing on the Queen’s honours lists.

King Charles III, which portrays a future royal family descending into acrimony and bitter rivalry on Prince Charles acceding the throne, premieres on BBC2 next week, adapted from writer Mike Bartlett’s West End and Broadway hit of the same name.

Its Olivier award-winning director, Rupert Goold, concedes it has presented some challenges for the state broadcaster. “Given what things could have been like, the BBC was very good,” he tells the Radio Times.

“And you have to remember that even with the stage version, we’d been through long conversations with lawyers and certain actors refusing to be involved because of how it might affect their future relationship with the honours system.”

Those who stepped up include Tim Pigott-Smith, 70, who died last month, and who reprises the role of Charles that he played in the stage version. Richard Goulding is Harry, whom he also plays in the Channel 4 show The Windsors.

Oliver Chris, who stars as William, admits the scene featuring the ghost of Diana might be seen as “pretty shocking”. “Some people will bridle at it, but I hope it’s done with enough intelligence and sensitivity not to be gratuitous. I’m very conscious that it’s a real person and a real family,” he told the magazine.

The BBC has stressed the drama is pure fiction. It depicts Charles at loggerheads with William, while the Peaky Blinders actor Charlotte Riley is a manipulative Lady Macbeth-like Duchess of Cambridge.

One scene featuring a furious Camilla – played by Margot Leicester – slapping her stepson William has already provoked ire. The Tory MP Andrew Bridgen said it was “unfortunate the BBC would seek to promote this flight of fantasy, which many licence-fee payers will find distasteful and which I believe denigrates and undermines our royal family. I hope that the BBC will make clear that the production is pure fiction,” he told the Mail on Sunday.

The BBC said: “The public know the difference between fact and fiction and King Charles III is a one-off BBC2 drama of the award-winning fictional play.”

The play premiered at the Almeida theatre in Islington, north London, before moving to the West End. It won the Critic’s Circle and Olivier awards for best new play, was named best theatre production at the South Bank Sky awards and nominated for a Tony for its Broadway production.

Pigott-Smith was nominated for an Olivier and a Tony for best leading actor for his performance. Bartlett said the cast and crew were still in shock over his death.

The play opens as the family gather after the funeral of the Queen, and as Charles holds his first weekly audience with the prime minister. His refusal to sign a statutory bill to restrict freedom of the press puts him at odds with the government and sees him increasing the armed guard outside Buckingham Palace as protests sweep the country.

Meanwhile, Harry is wooing a republican and wants to become a commoner, while Kate pushes William to take on Charles.

The TV adaptation is made by the BBC and is also part of the US broadcaster PBS’s Masterpiece anthology series, with Bartlett and Goold as executive producers.

Rebecca Eaton, an executive producer of Masterpiece, described King Charles III as “an ingenious play that promises to be as riveting on television as it was on stage. It’s a play set in the near future, but with Shakespeare never far away.”