The President equally charged the populace to be patient with the government, advising that whenever there’s any legislation they have misgivings about, “they should engage the process for such laws in line with democratic processes.”
In his remarks at the Joint Executive-Legislative Leadership Retreat, held at the State House Conference Centre, President Buhari said the collaboration enjoyed from the leadership of the National Assembly had made it easier for the government to set and realize development goals, and respond to changes in the economy faster like the Coronavirus pandemic that necessitated review of the 2020 budget.

According to the President, some of the gains recorded from working together also include accelerated passage of the 2020 Budget and its review in response to the Coronavirus pandemic, timely confirmation of nominees, and passage of critical legislation by the National Assembly. 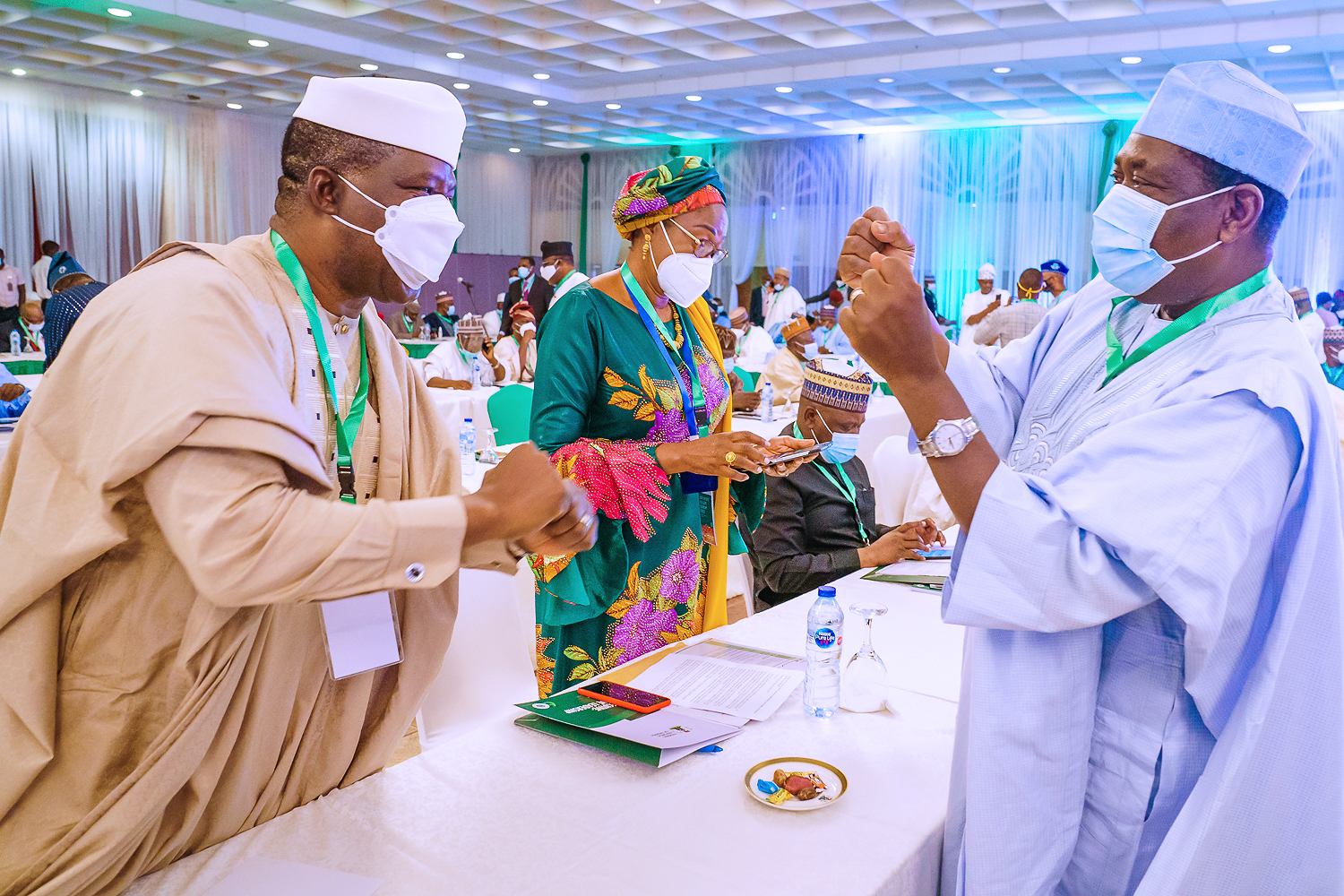 “This retreat provides us another opportunity to interface, reflect, brainstorm, and engage as One Government. I use the word One Government because there can only be one Government in a nation at a time and officials both elected and appointed in the Executive or Legislative arm must all be working for the peace, unity, and development of our country.

“This Retreat named: “Promoting Effective Executive-Legislative Partnership: Finding a Middle Ground” is apt as it reflects the peculiarity of a Presidential system of government like ours.

“The experience of the last 20 years of steady democratic practice

in Nigeria has underlined the need for effective partnership and collaboration between the executive and legislative arms of government to deliver on our mandate.’’ 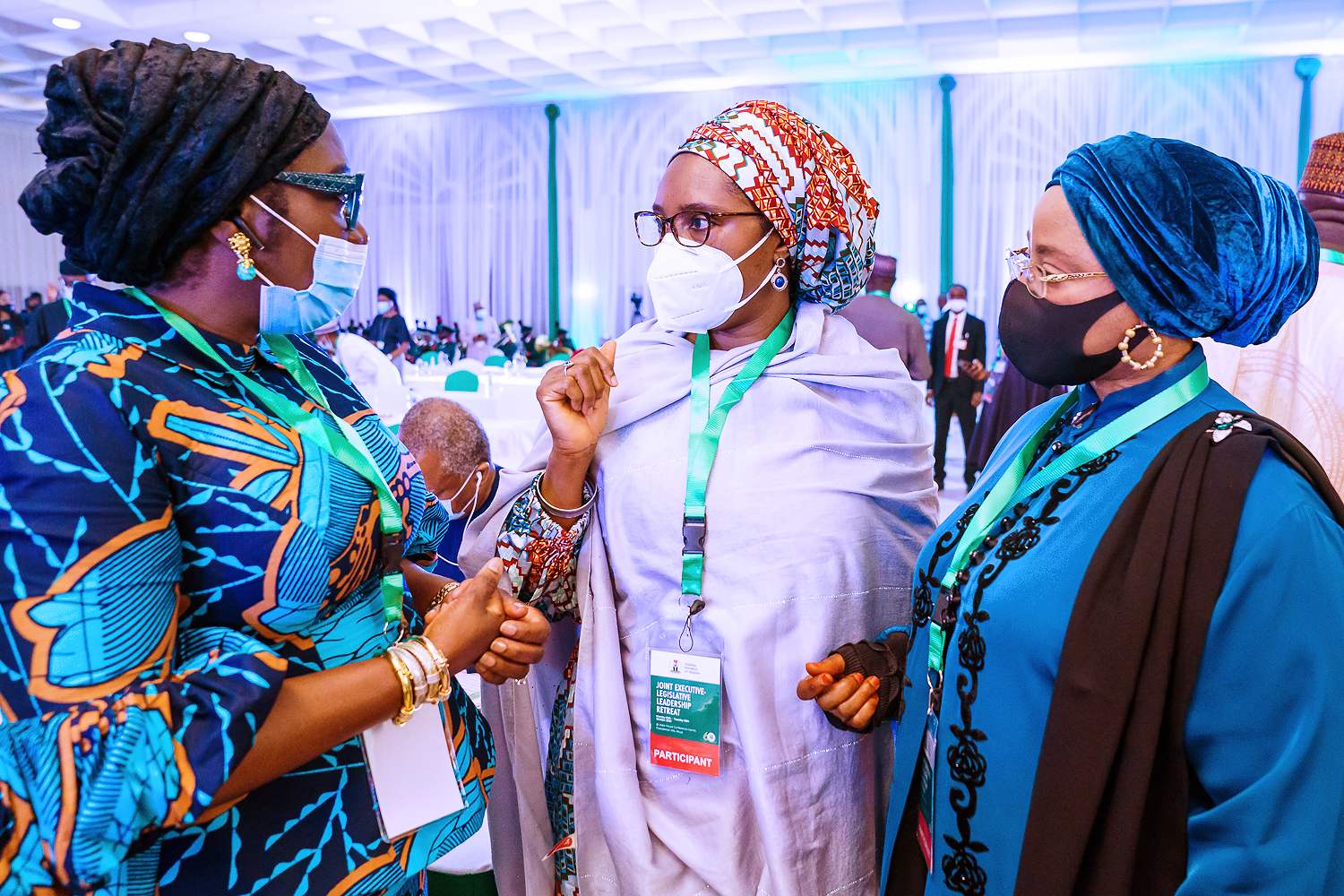 President Buhari told the legislators that the Federal Executive Council had already streamlined its priorities to nine areas of development, and ministers had been mandated to align their targets with the bigger picture of making life better for all Nigerians, urging the legislature to align its priorities as well.

“While all members of the Federal Executive Council have been given clear mandates and yearly targets towards achieving the set indicators and goals, I recognize the critical role of the National Assembly in helping to deliver this Agenda and the strategic goals set by this Government.

“We cannot do this alone without your support and collaboration. I am equally aware that both the Senate and the House of Representatives have adopted the new Legislative Agenda for the current Assembly. I must thank the Senate President and Rt. Honourable Speaker for the updated version of the Legislative Agenda of the 9th National Assembly.

“The urgent need for aligning the 9-Point priority Agenda and the Legislative Agenda of both the Senate and the House of Representatives cannot be over-emphasized. I will therefore suggest that a Technical Committee be established after this retreat to harmonise these critical and strategic documents to help improve synergy and coordination.’’ 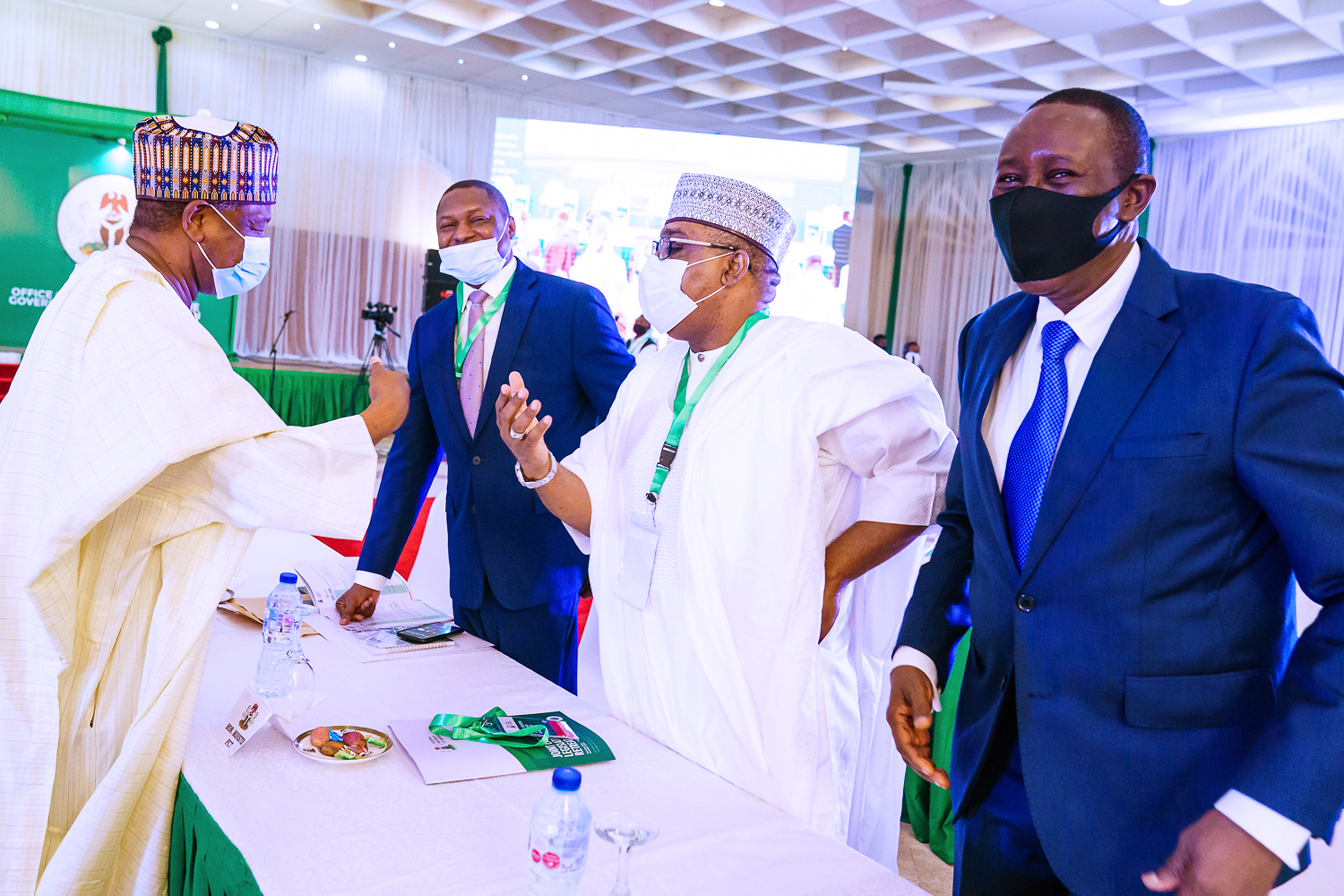 Budget and National Planning, and Mr. Peterside Atedo with representation from the National Assembly to oversee the development of the Nigeria Agenda 2050 and Medium-Term National Development Plan (MTNDP) to succeed vision 20:2020 and the Economic Recovery and Growth Plan (ERGP) 2017-2020.

The President said the National Steering Committee will facilitate the linkage between policy-plans and budget in a manner that will help lift 100 million Nigerians out of poverty within the next 10 years.

“Similarly, I unveiled a (9) Nine-Point Priority Development Agenda of this administration aimed at improving the livelihood of Nigerians within the next three years. These include: building a thriving and sustainable economy; enhancing social inclusion and reducing poverty; enlarging agricultural output for food security and export and attaining energy sufficiency in power and petroleum products.

“Expand transport and other

infrastructural development; expand business growth, entrepreneurship and industrialisation; expand access to quality education, affordable healthcare and productivity of Nigerians; build a system to fight corruption on a permanent basis, improve governance and create social cohesion and improve security for all.’’

President Buhari recommended the establishment of a Technical Working Group to synthesise the outcome of the retreat and make appropriate recommendations to the leadership of the Federal Executive Council and the National Assembly in order to drive effective implementation of the resolutions or agreements reached.

“Let me also remind our fellow patriots, countrymen, and women, that the process of law-making and governance is dynamic and ever-evolving. I will seek their indulgence to be patient with any legislation or law which they have certain misgivings about, and engage the process for reviewing such laws in line with democratic practices.’’

The President thanked the ninth National Assembly leadership and legislators for the cordial and warm relationship enjoyed in one year. 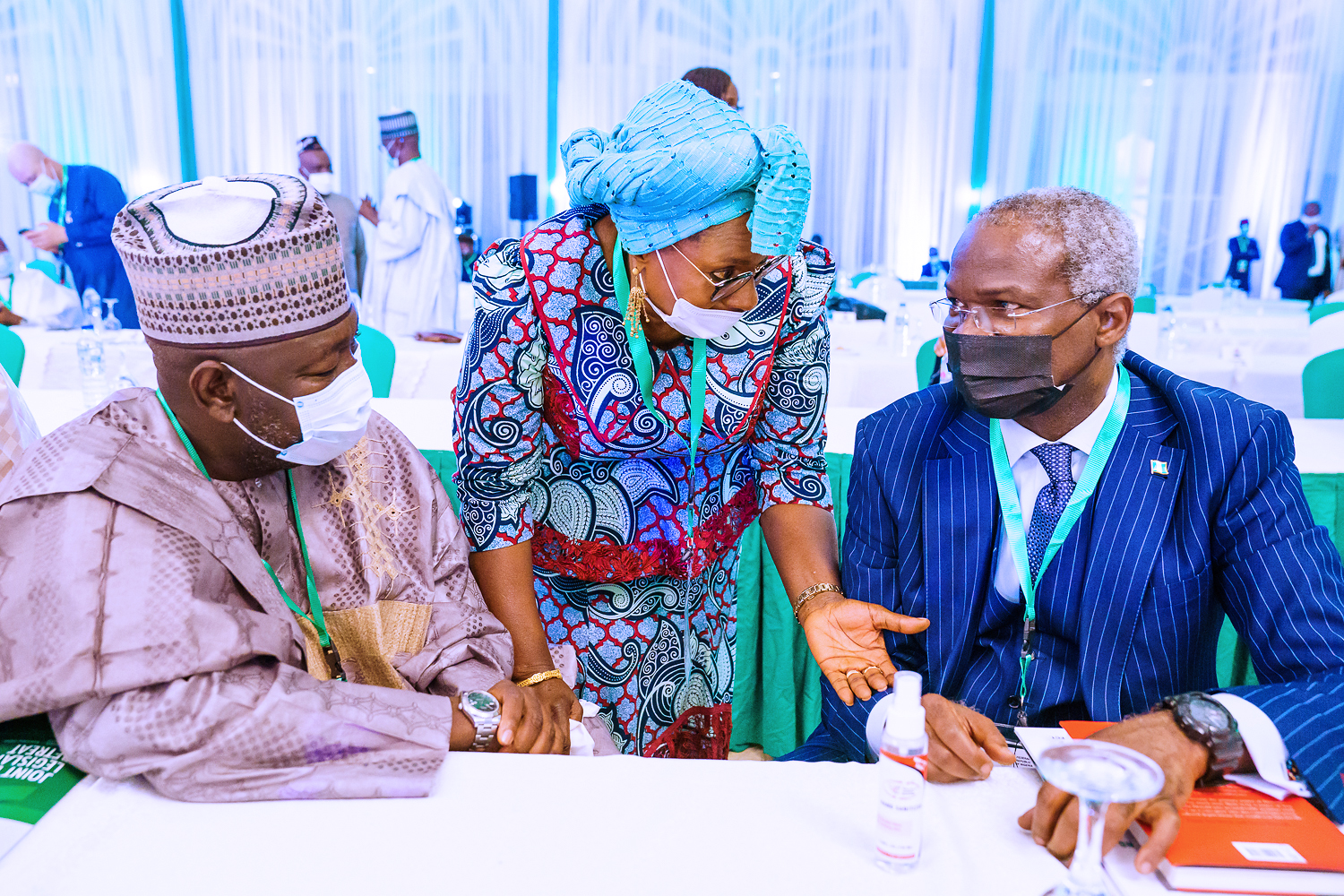 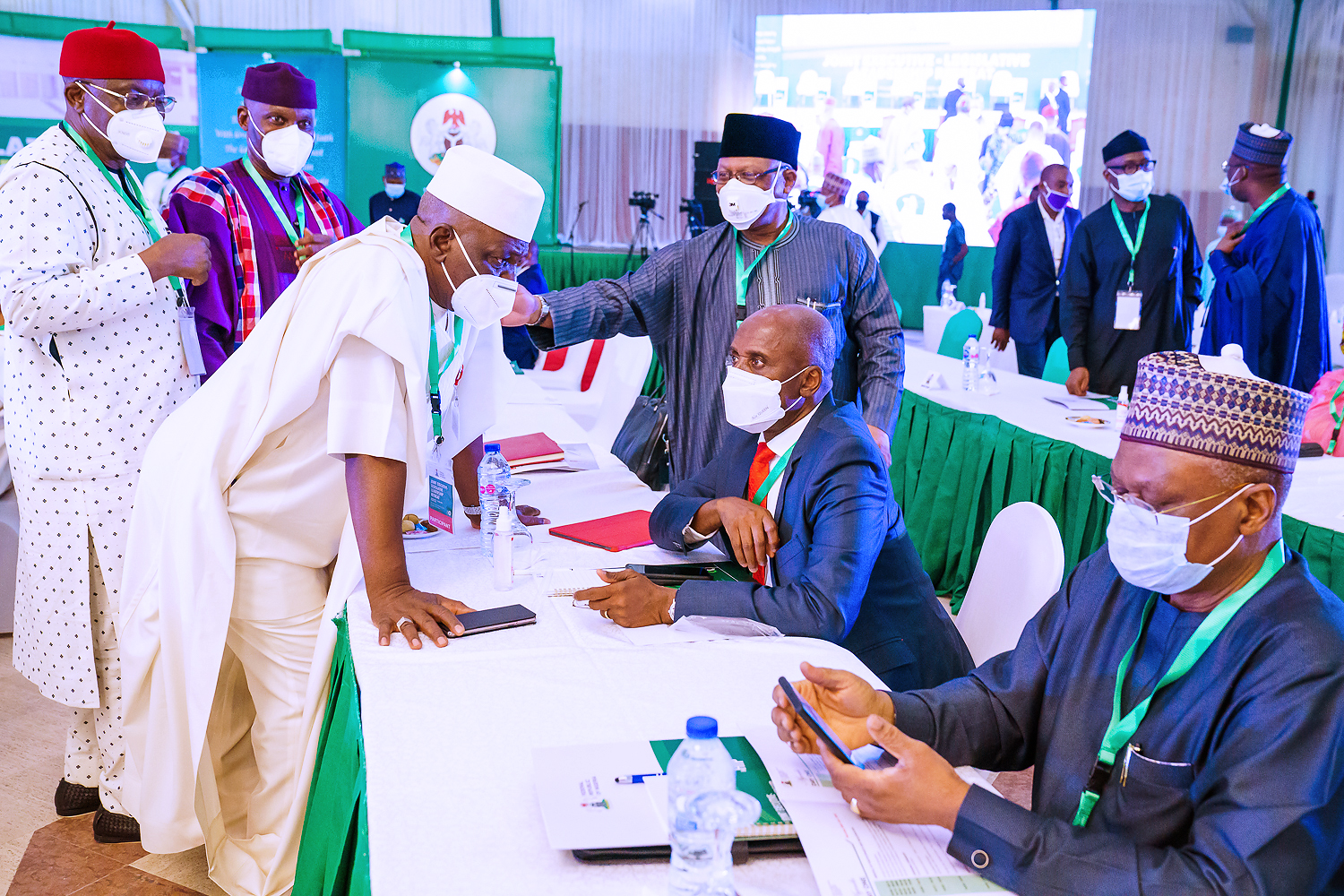 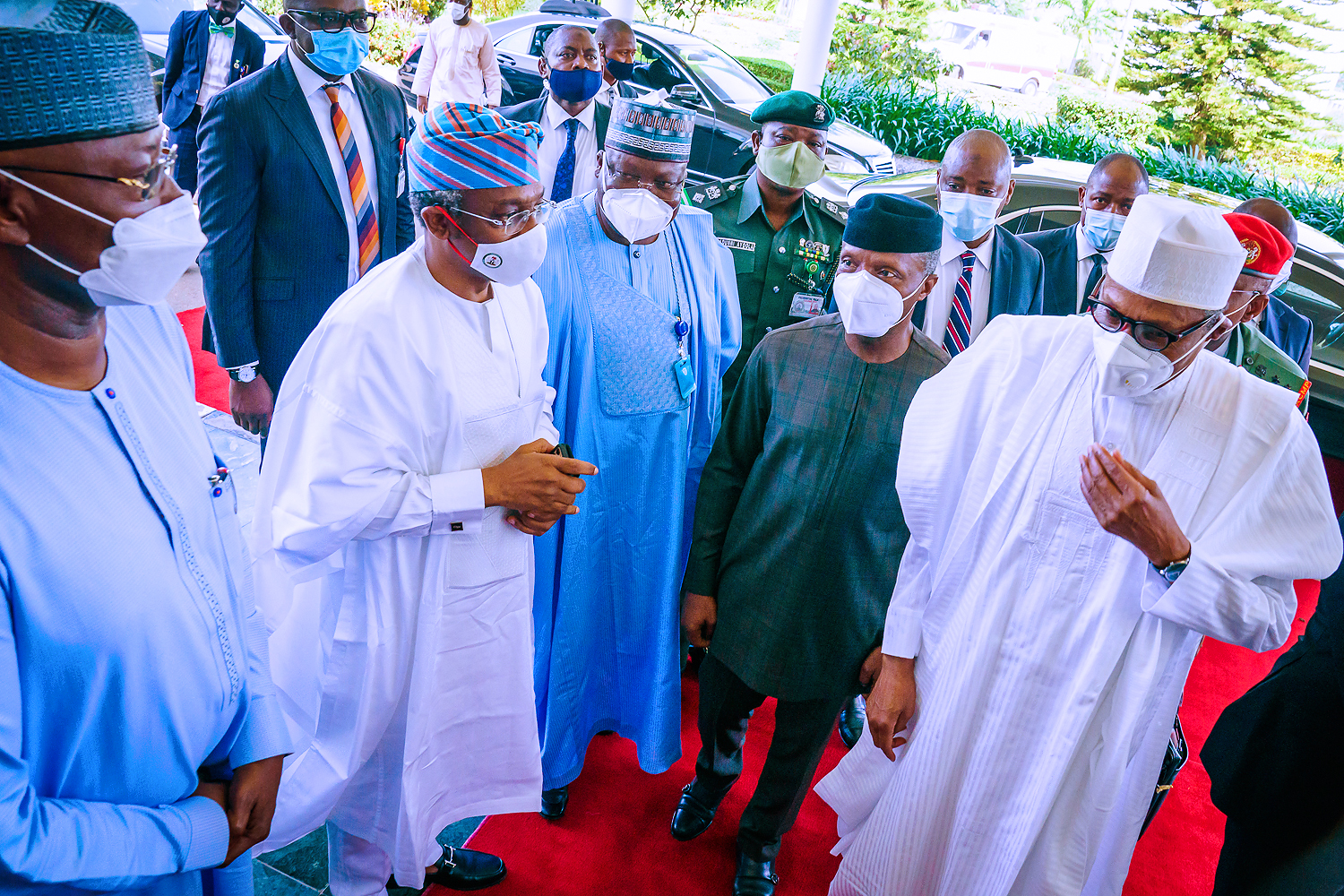 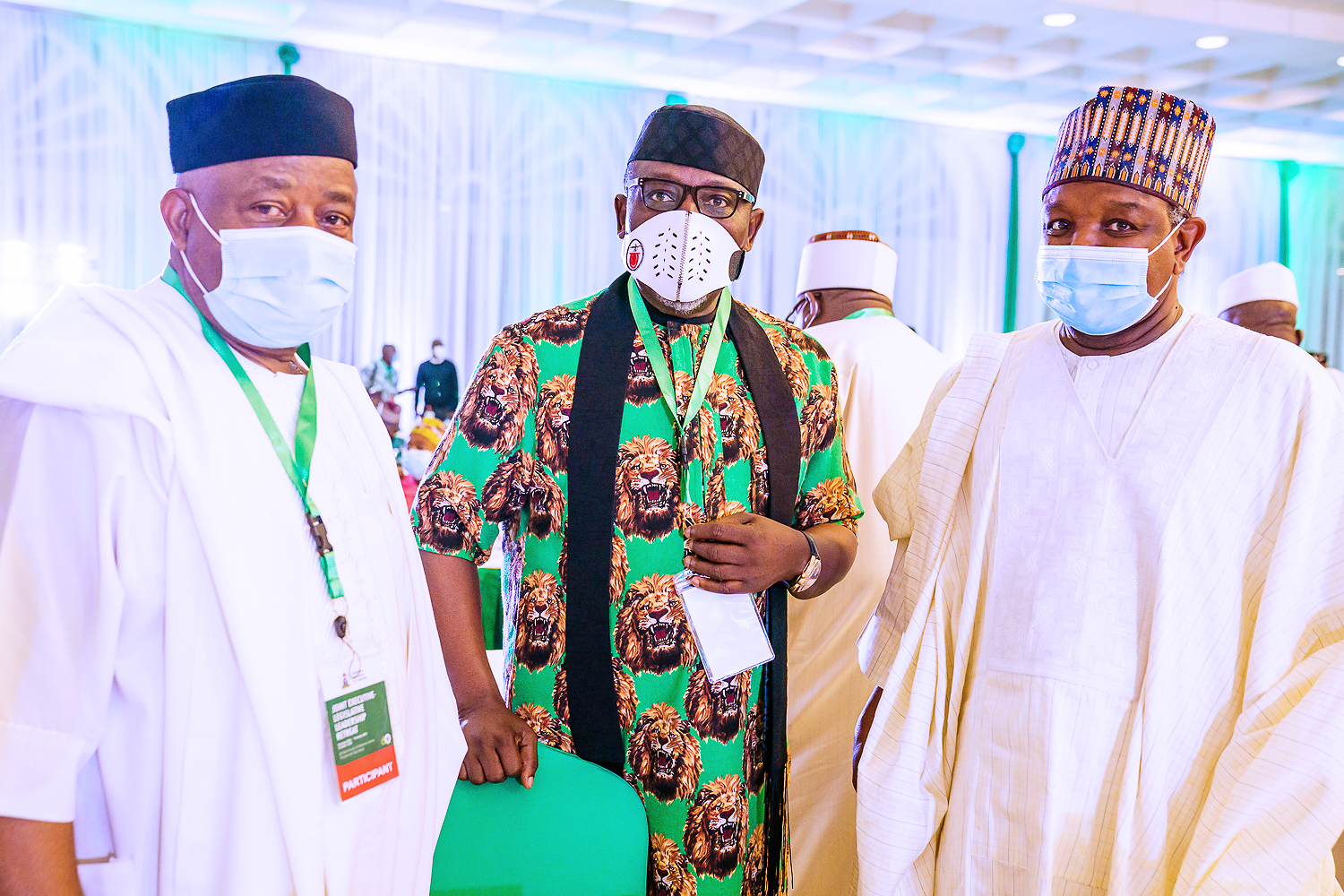 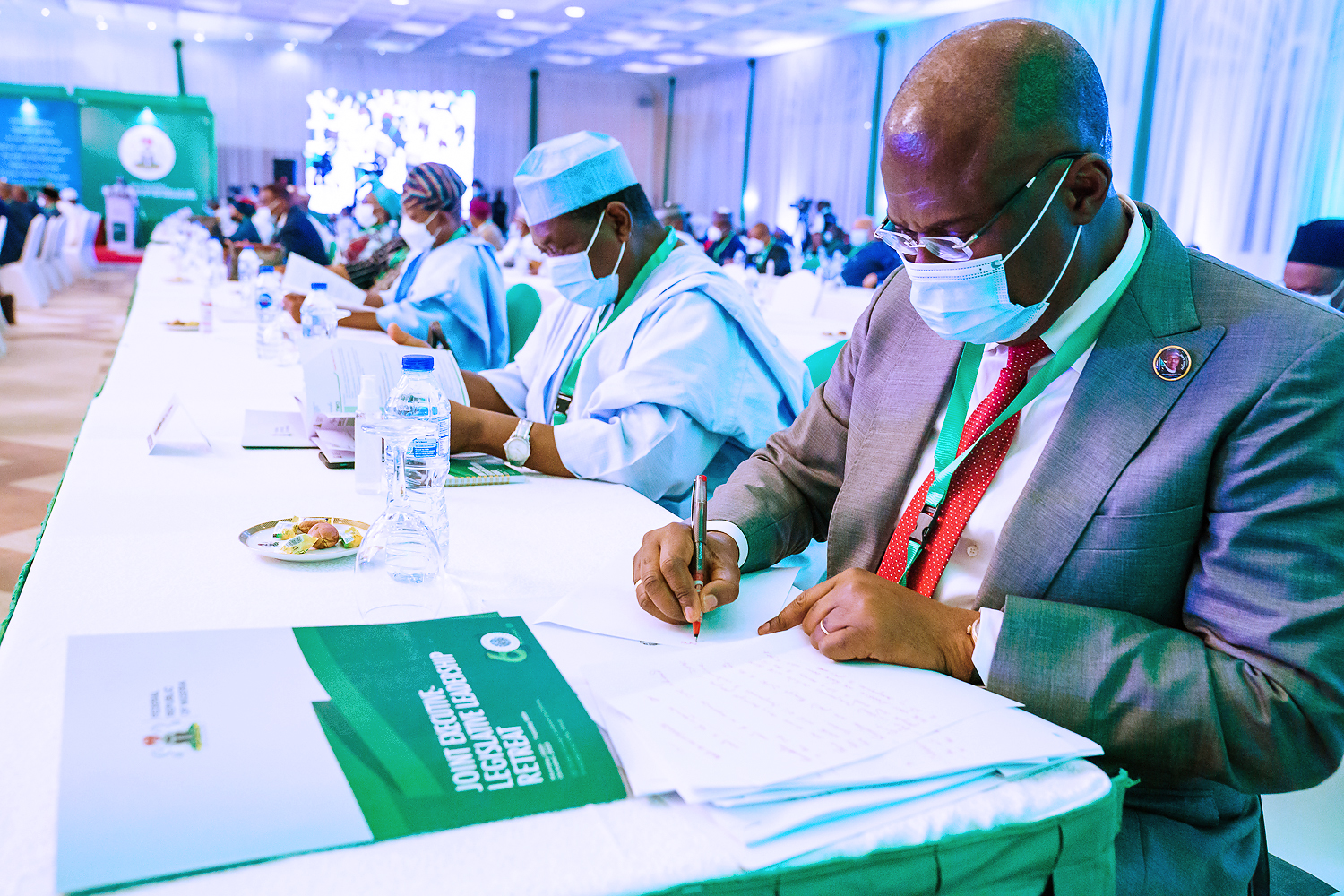 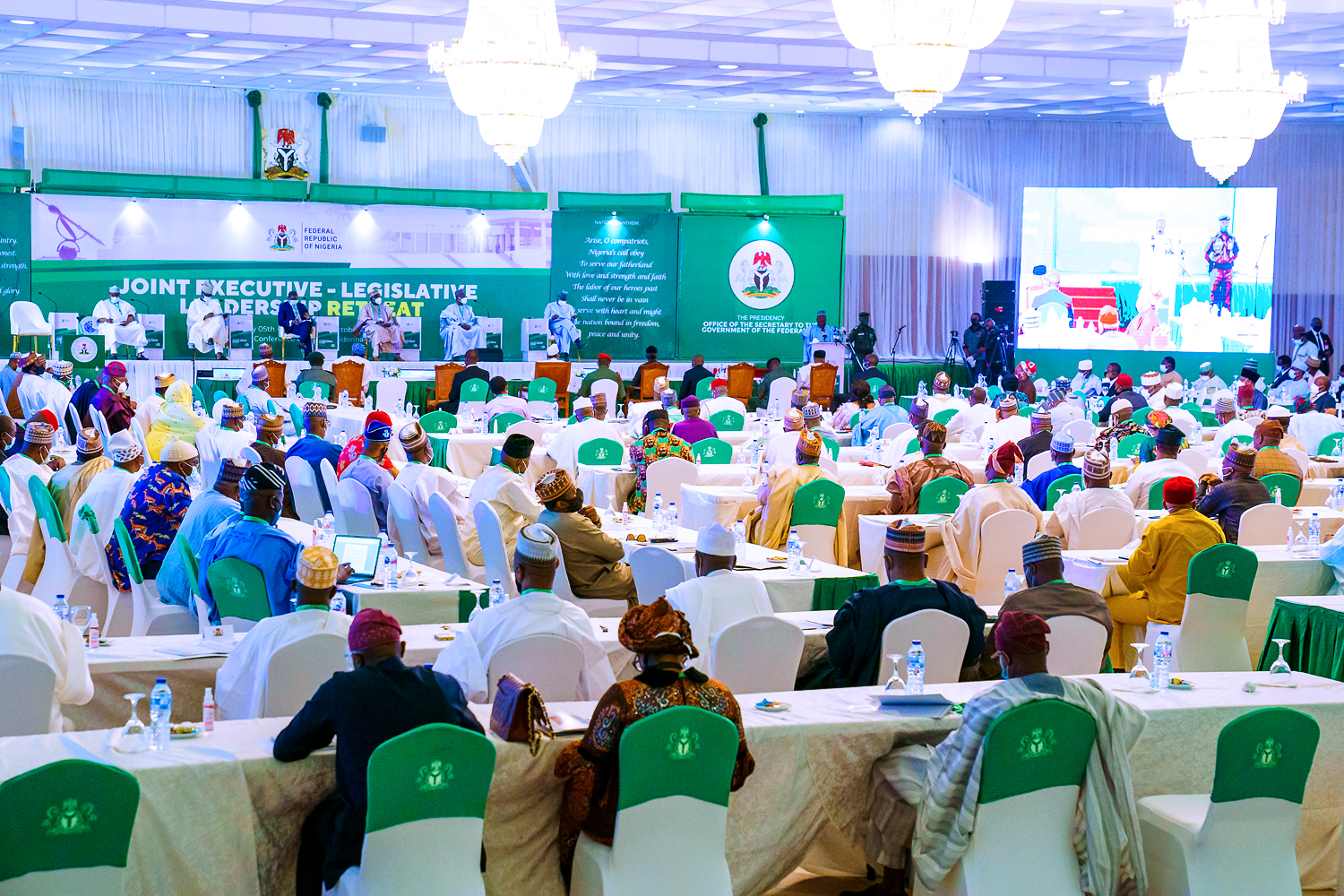 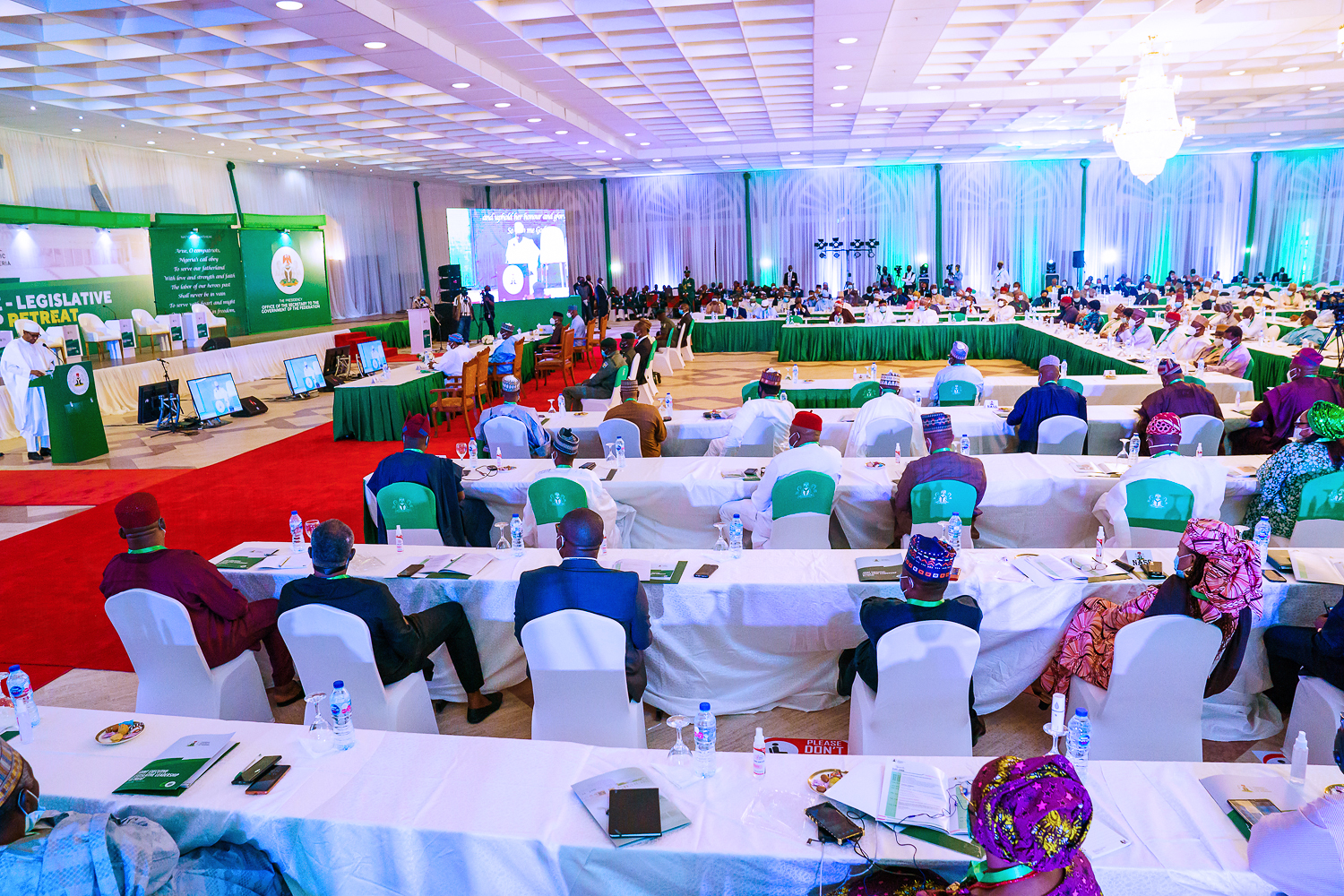 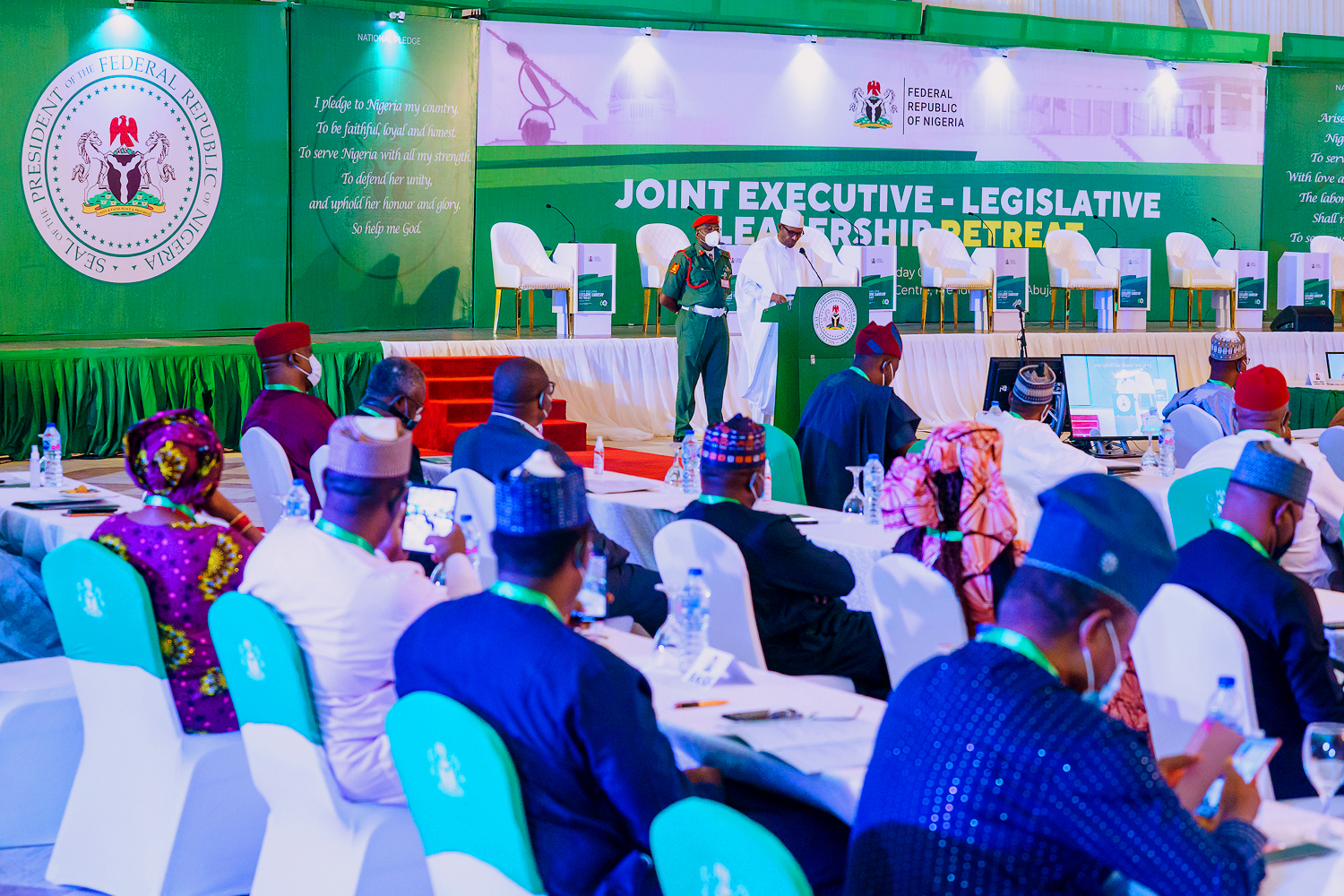 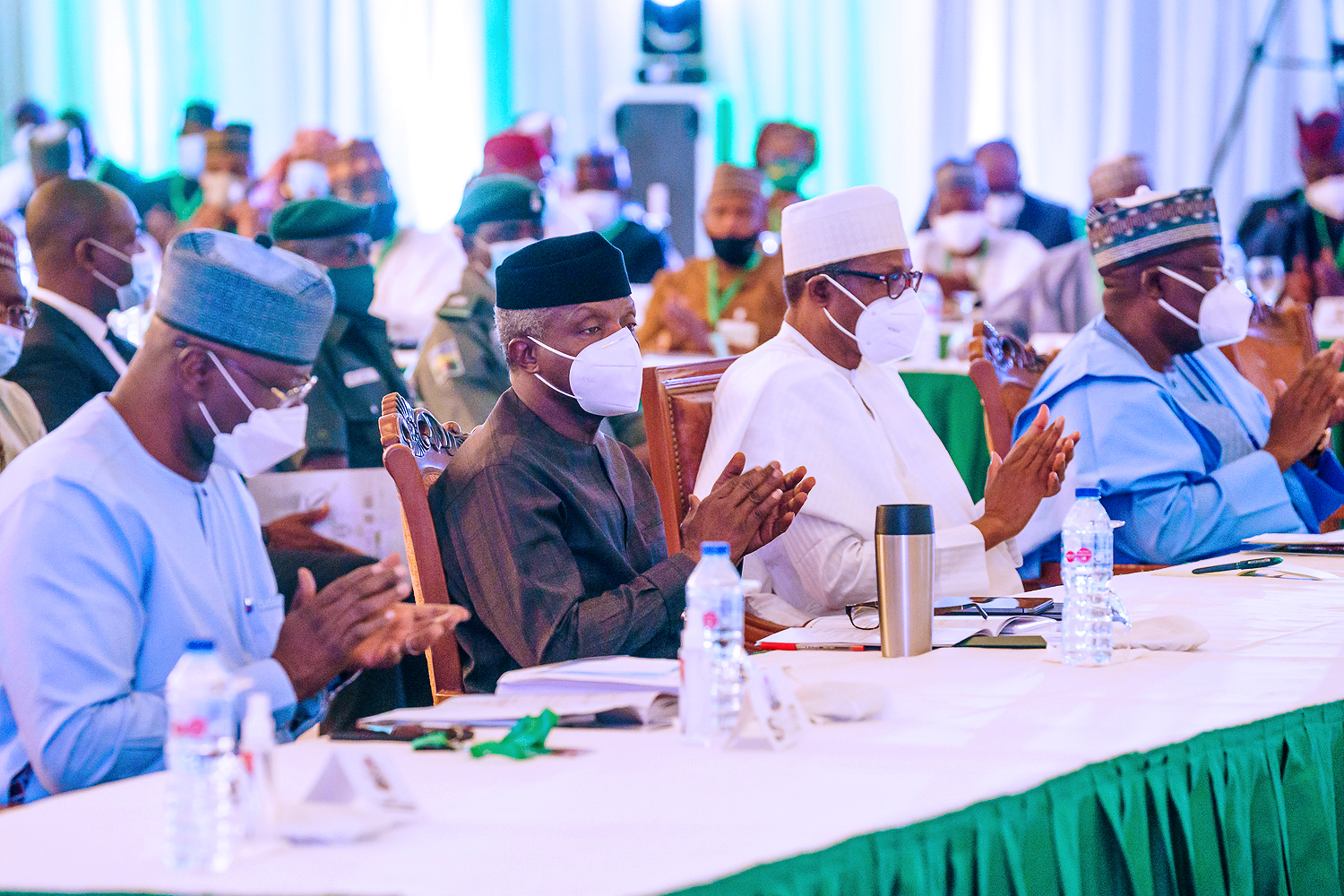 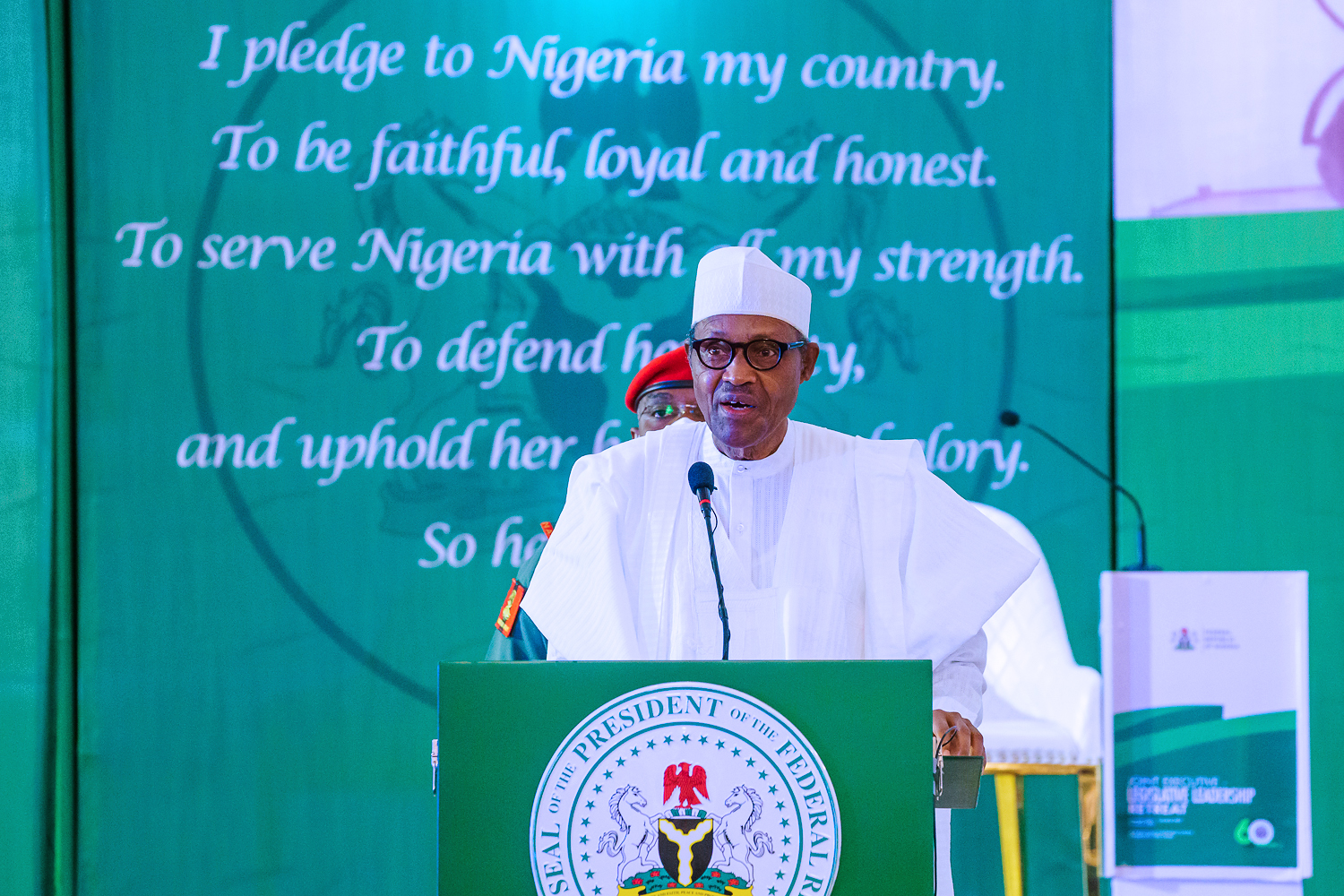