The next generation farmhand in Japan’s ageing rural heartland may be a drone.

For several months, developers and farmers in northeast Japan have been testing a new drone that can hover above paddy fields and perform backbreaking tasks in a fraction of the time it takes for elderly farmers.

“This is unprecedented high technology,” said Isamu Sakakibara, a 69-year-old rice farmer in the Tome area, a region that has supplied rice to Tokyo since the 17th century.

Developers of the new agricultural drone say it offers high-tech relief for rural communities facing a shortage of labour as young people leave for the cities. 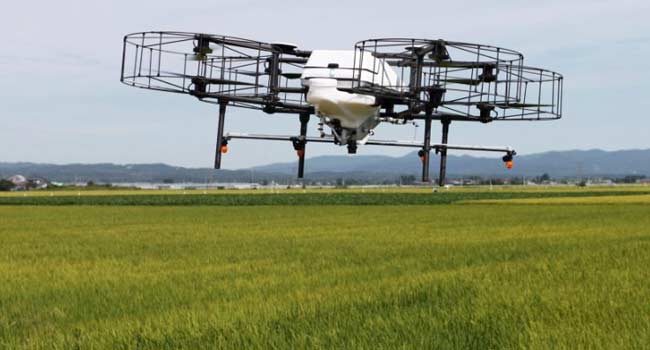 “As we face a shortage of next-generation farmers, it’s our mission to come up with new ideas to raise productivity and farmers’ income through the introduction of cutting-edge technologies such as drones,” said Sakakibara, who is also the head of JA Miyagi Tome, the local agricultural cooperative.

Read More ‘Pains Us So Much’, Says Okorocha -Defection Of APC Governors

The drone can apply pesticides and fertilizer to a rice field in about 15 minutes – a job that takes more than an hour by hand and requires farmers to lug around heavy tanks.

The Nile-T18 was developed by drone start-up Nileworks Inc and recently tested in collaboration with JA Miyagi Tome and trading house Sumitomo Corp.