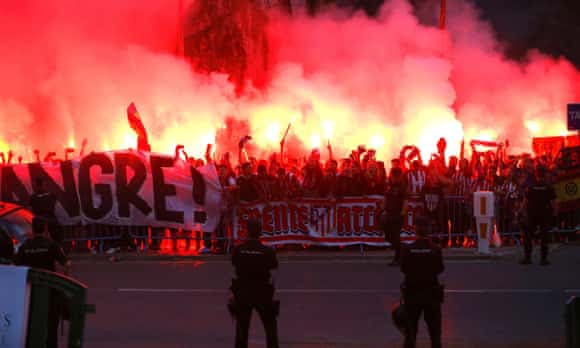 Nobody has retained Big Cup since Milan in 1990. This state of affairs is usually held up as evidence of how much harder it is to win Europe’s premier pot in the modern era. After all, you couldn’t triumph these days simply by beating Östers Idrottsförening, Argeș Pitești, Berliner Dynamo, a declining Ajax and a Hamburg side whose star striker was dreaming of his big-money move to Southampton, as Nottingham Forest did when they kept hold of old big ears in 1980. Mind you, to be scrupulously fair, Forest only had the opportunity to do that by winning a 42-game league in the first place, then their first Big Cup, all the while knowing that one slip would bring an abrupt and terminal halt to their almost-certainly-never-to-be-repeated adventure, as opposed to swanning around in the knowledge that whatever happens you’ll be guaranteed another go next year, and the one after that, and the one after that. But no, it was apparently a doddle in the old days. There’s no talking to some people, so let’s just go with that.But now Real Madrid have a great chance of bucking this recent trend. Despite the dice being outrageously loaded against them, plucky Real, who were last champions of their domestic league a mere five years ago, will become the first team to win consecutive Big Cups in Preposterously Difficult Era should they hold on to their three-goal semi-final first-leg advantage over neighbours Atlético on Wednesday night, then go on to triumph in Cardiff over Juventus, for whom losing Big Cup finals is not so much a habit, more a way of life. “Two years ago everyone thought it was my last final, but you have to believe in your dreams,” says 39-year-old Juve keeper Gigi Buffon, who came close in 2003 and 2015 and deserves credit for both the 600-minute run without conceding a Big Cup goal finally ended by Monaco’s Kylian Mbappé on Tuesday, and for keeping his hopes up despite knowing full well how Juve usually roll on the big occasion.