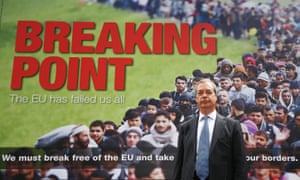 Media coverage of the EU referendum campaign was dominated by “overwhelmingly negative” reports about the consequences of migration to the UK, according to a new report.

King’s College London’s centre for the study of media, communication and power (CMCP) looked at more than 15,000 articles published online by 20 national news outlets. The study (pdf) found that immigration and the economy were the two most-covered issues in coverage described by as “acrimonious and divisive”.

Media interest in immigration more than tripled during the 10-week campaign, rising faster than any other political issue and appearing on 99 front pages, compared with 82 about the economy. Most of these front pages (79) were published by pro-leave newspapers.

Specific nationalities were singled out for particularly negative coverage – especially Turks and Albanians, but also Romanians and Poles.

The majority of this negative coverage was from three online publications: the Mail, the Sun and the Express. Some of them led to complaints, including the “Let us in: we’re from Europe” Mail front page that needed a correction after it was revealed that the refugees depicted were from the Middle East.

Martin Moore, CMCP’s director, said the bitterness of the Brexit debate on both sides had weakened public trust not just in the media but in political discourse more generally.

The report concludes: “Given the extent to which each side accused the other of dishonesty and scaremongering, and the extent to which these claims were picked up and often amplified in news outlets, it would be surprising if the public’s political trust had not diminished, and their fears had not increased, after the vote of 23 June 2016.”

While both sides indulged in mutual recriminations, the phrase “Project Fear” was most successfully attached to the remain campaign, and was referenced 739 times by the 20 publications.

Moore said there were lessons for the current election campaign from the bitter referendum coverage. Speaking of the shift away from the economy to immigration half way through the campaign, he said: “The incumbent cannot control the agenda.”

The economy was the most covered campaign issue, with 7,028 articles compared with 4,383 about immigration, though the latter were more prominent. Health was the third most reported issue with 1,638 articles.

Economic claims were also highly contested. Warnings about the repercussions of Brexit were routinely dismissed as deliberate remain camp “scaremongering”. The claim that Brexit would cost households £4,300 a year by 2030 was mentioned in significantly more articles (365) than the leave campaign’s controversial claim that the EU cost the UK £350m a week (147).

The KCL study is the first to examine all articles published prior to the Brexit referendum by the UK’s leading online media It included all national newspaper titles, online-only outlets such as BuzzFeed and the Huffington Post, and broadcasters such as the BBC, ITV, Channel 4 and Sky, who were required by law to be neutral.

Studies by Loughborough and Cardiff universities and Reuters concluded that the leave campaign dominated media coverage.