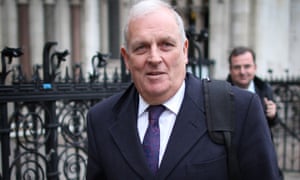 The parent company of the Sun is reportedly in negotiations about the departure of the former editor and columnist Kelvin MacKenzie after he compared the footballer Ross Barkley, who is of mixed race, to a gorilla and made disparaging comments about the city of Liverpool.

News UK is understood to be in talks about exit terms with MacKenzie, a long-standing ally of Rupert Murdoch. MacKenzie edited the Sun between 1981 and 1994 and returned as a weekly columnist in 2015.

Last month MacKenzie was suspended by the Sun after he wrote in his column that he was not surprised that the Everton player Barkley, whose grandfather is Nigerian, was punched in a nightclub because he was similar to an animal in a zoo. He also said the only other men in Liverpool who earned similar amounts of money to Barkley were drug dealers.

News of MacKenzie’s potential departure was reported by the Financial Times on Monday.

Liverpool’s mayor, Joe Anderson, reported MacKenzie to the police for what he said were “racial slurs”, and Everton banned journalists from the Sun from its stadium. Merseyside police are continuing their inquiries into the incident.

News UK apologised for MacKenzie’s comments and the Sun removed the article from its website on the afternoon of Friday 14 April, the day it was published. In a written apology to Barkley in the Sun, the newspaper said it had been “unaware of Ross Barkley’s heritage and there was never any slur intended”.

In the US the Murdochs are dealing with allegations of sexual harassment at Fox News, which have led to the exits of the Fox News chairman Roger Ailes and leading presenter Bill O’Reilly.

On Monday Wendy Walsh, one of the women who has accused O’Reilly of sexual harassment, met the UK media regulator Ofcom to call for Fox to be blocked from taking full control of Sky.

Lawyer Lisa Bloom, who is representing Walsh and three other women who allege sexual harassment or discrimination at 21st Century Fox, said Ofcom should rule that Murdoch would not be a “fit and proper” owner of Sky.

“It’s phone hacking part two,” she said. “As with phone hacking in the UK, this Murdoch-owned company has stood by senior staff they knew had acted illegally or immorally. By my count Fox News currently faces lawsuits filed by 19 different employees alleging sexual and racial harassment and retaliation.

“We want the British regulator to understand the corporate governance failures at that company. We both very strongly believe that Fox should not be allowed to take full ownership of Sky.”

A spokesperson for News UK said MacKenzie “remains suspended”, and declined to comment on whether he would leave the organisation.

MacKenzie said last month that the outcry over his comments was “beyond parody”. He told the Press Association: “I had no idea of Ross Barkley’s family background and nor did anybody else. For the mayor of Liverpool and a handful of others to describe the article as racist is beyond parody.”

In the column MacKenzie wrote: “Perhaps unfairly, I have always judged Ross Barkley as one of our dimmest footballers. There is something about the lack of reflection in his eyes which makes me certain not only are the lights not on, there is definitely nobody at home.

“I get a similar feeling when seeing a gorilla at the zoo. The physique is magnificent but it’s the eyes that tell the story.

“So it came as no surprise to me that the Everton star copped a nasty right-hander in a nightclub for allegedly eyeing up an attractive young lady who, as they say, was ‘spoken for’.

“The reality is that at £60,000 a week and being both thick and single, he is an attractive catch in the Liverpool area, where the only men with similar pay packets are drug dealers and therefore not at nightclubs, as they are often guests of Her Majesty.”