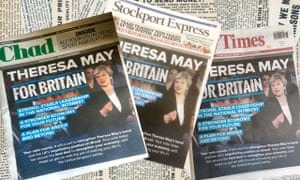 The four-page wraparound advert, which would have cost several thousand pounds in each publication, appeared like a normal newspaper front page with the headline “Theresa May for Britain” above a large picture of the prime minister. A line of much smaller type reveals it is an “advertiser’s announcement”.

Papers accepting it included the Stockport Express and Bury Times, whose readers were choosing the first elected mayor of Greater Manchester; the Southport Visiter, in the area where the inaugural Liverpool city mayoral election was being held; the Darlington, Aycliffe & Sedgefield Advertiser in the Tees Valley; and the Walsall Chronicle in the West Midlands.

Many readers were unhappy, taking to social media to dismiss the advert as “despicable” and “wrong” and asking whether it was illegal. “Hope you can buy some integrity with the money you got from this ad,” one reader of the Bury Times tweeted the paper’s official account. Others threatened to boycott the publications.

Newsquest, which owns the Bury title, was unrepentant and said other parties were free to do the same. “Our local news brands are apolitical,” said a spokesman. “We support free speech and local democracy without fear or favour. As in previous elections and referendums, as long as political parties standing in the election comply with relevant law and regulation, they are entitled to communicate their message to the local community and advertise accordingly. All available advertising formats are available to all parties.”

Other newspapers running the advert included the Rhyl, Prestatyn & Abergale Journal in north Wales, the Mansfield Chad and Retford Times in Nottinghamshire, the Chorley and Leyland Citizen in Lancashire, the Brighton Argus in Sussex, the Westmorland Gazette in Cumbria, the South Wales Echo, the Scunthorpe Telegraph, the Exeter Express & Echo and the Sentinel in Stoke.

All of the areas reached by the advert are Tory targets in the general election. Bury has two marginal parliamentary seats: the Conservative, David Nuttall, has just a 378 majority in Bury North, while Labour’s Ivan Lewis had a lead of 4,992 over his Tory rival in Bury South in 2015.

Mansfield has been Labour since 1923 and has never had a Tory MP, but Conservatives clearly view the 5,315 majority of the incumbent, Alan Meale, as vulnerable. The Tory MP in the Vale of Clwyd, which includes Rhyl and Prestatyn, has a majority of just 237. Labour’s Lindsay Hoyle, the deputy speaker of the House of Commons and MP for Chorley, has a majority of 4,530. In Cumbria, the Tories hope to oust John Woodcock, a prominent critic of Jeremy Corbyn, from his Barrow seat, where he has a lead of just 795 votes.

At the last general election, the Conservative party came under criticism for buying front-page adverts in newspapers in marginal seats, with one former weekly editor telling Hold The Front Page it was “inexcusable”.

The Electoral Commission said it had no power to stop the practice. “There’s nothing in electoral law that regulates newspaper advertising during elections,” said a spokeswoman. “The only thing that we would regulate is whether the parties properly declare their advertising spending, making clear if it comes from the local candidates or the party nationally.”

A Conservative spokesman said: “Newspaper advertising covers are a long established form of campaigning that are used by all political parties. We are proud to support local newspapers.”

Some of the Tory MPs representing areas reached by the advert are facing claims for electoral fraud after allegedly breaching local spending limits during the 2015 election, including Nuttall and William Wragg, who won the marginal Stockport seat of Hazel Grove from the Liberal Democrats.

The Independent Press Standards Organisation said: “Advertising regulation, including wraparounds which might be described as front page advertorials, sits with the Advertising Standards Authority.”