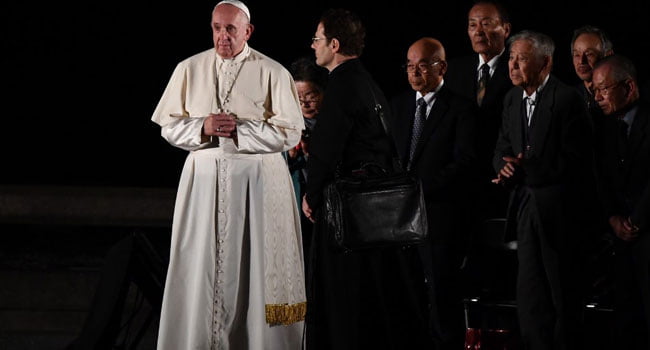 In a highly symbolic visit to the Japanese city devastated by the nuclear attack in August 1945, Francis said nuclear weapons were “not the answer” to a desire for security, peace, and stability.

“Indeed they seem always to thwart it,” he said.

At least 74,000 people died from the atomic bomb unleashed on the city in western Japan — just three days after the world’s first nuclear attack hit Hiroshima and killed at least 140,000.

“This place makes us deeply aware of the pain and horror that we human beings are capable of inflicting upon one another,” said the sombre pontiff on the first full day of his Japan trip.

Hundreds of people in white waterproofs sat in torrential rain to hear the pope’s speech, next to the emblematic photo of a young boy carrying his dead baby brother on his back in the aftermath of the attack.

He laid a wreath of white flowers and prayed silently, unprotected from the lashing downpour.

Francis took aim at what he called the “perverse dichotomy” of nuclear deterrence, saying that peace is incompatible with the “fear of mutual destruction or the threat of total annihilation.”

This marked a break with past pontiffs — in a 1982 UN speech, Pope John Paul II had described nuclear deterrence as a necessary evil.

The 82-year-old Francis also hit out at the “money that is squandered and the fortune made” in the arms trade, describing it as an “affront crying out to Heaven” in a world where “millions of children are living in inhumane conditions.”

Later Sunday, Francis will visit Hiroshima and meet survivors of the atomic attack, known in Japanese as hibakusha, at the world-famous Peace Memorial in the city synonymous with the horror of nuclear war.

Fukahori, a Catholic, has prayed every day for those killed and their bereaved families.

“My heart is just full of overflowing feelings,” he said. “Just meeting him is enough. I’m so glad and speechless.”

Shimohira, who was 10 at the time of the attack, conveyed the terror of the bomb.

“My mother and older sister were killed, charred. Even if you survived, you couldn’t live like a human or die like a human… It’s the horror of nuclear weapons,” she said.

At a Mass at a baseball stadium in Nagasaki with worshippers now shielding their eyes from the sun, Francis said the city “bears in its soul a wound difficult to heal” and warned that “a third World War is being waged piecemeal.”

The Argentine pontiff is fulfilling a long-held ambition to preach in Japan — a country he wanted to visit as a young missionary.

“Ever since I was young I have felt a fondness and affection for these lands,” said Francis when he arrived in Japan.

Like in Thailand, the first leg of his Asian tour, Catholicism is a minority religion in Japan.

Most people follow a mix of Shinto and Buddhism, with only an estimated 440,000 Catholics in the country.

Christians in Japan suffered centuries of repression, being tortured to recant their faith, and Francis paid tribute to the martyrs who died for their religion.

Alongside its nuclear history, Nagasaki is also a key city in Christian history where so-called “Hidden Christians” were discovered after keeping the faith alive in secret for 200 years while Japan was closed to the world.

The pope said in Nagasaki that as a “young Jesuit from the ‘ends of the earth’” he had found “powerful inspiration in the story of the early missionaries and the Japanese martyrs.”

Francis returns to Tokyo on Sunday night where he will on Monday meet victims of Japan’s “triple disaster” — the 2011 earthquake, tsunami, and nuclear meltdown.

He is also scheduled to deliver a Mass at a Tokyo baseball stadium, meet Japan’s new Emperor Naruhito and hold talks with Japanese government officials and local Catholic leaders