Taiwan’s future should be decided by its own people and that the EU backs the island’s “sovereign” existence, in a pointed warning to Beijing,

Taiwan lives under the constant threat of invasion by China, which claims the self-ruled democratic island as part of its territory and has vowed to seize it one day, by force if necessary. Beijing’s increased sabre-rattling has spurred greater shows of diplomatic support for Taipei and prompted visits from Western politicians.

Nicola Beer, one of the European Parliament’s vice-presidents, arrived on Tuesday for what Taiwan’s foreign ministry described as “the first official visit” by an MEP of her rank.

In a meeting with President Tsai Ing-wen, Beer voiced Europe’s concerns over Beijing “moving in a direction that could unilaterally alter the status quo” with Taipei. 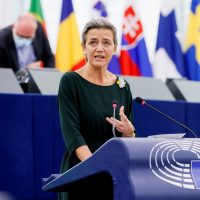 “This must not happen, under no circumstances, under no pretext. Only the Taiwanese people can decide on Taiwanese future,” she said.

“Don’t doubt Europe’s reassurance in your strive for a democratic, peaceful and sovereign existing.”

Beijing’s Taiwan Affairs Office has said the island’s future should be decided by “all Chinese people”.

Beer said Europe will “stand up against any provocation” and urged China to refrain from “threatening gestures”.

China should play a constructive role in maintaining the status quo “based on neutral and respectful dialogue”, she added.

Beer, a lawyer and a member of Germany’s liberal Free Democratic Party, said upon her arrival on Tuesday that Europe must support Taiwan’s democracy, citing Russia’s invasion of Ukraine and China’s crackdown in Hong Kong.

Russia’s assault on Ukraine has deepened fears within Taiwan and among key Western allies that Beijing might do the same under President Xi Jinping.

Beijing has ramped up military, diplomatic and economic pressure since the 2016 election of Tsai, as she views the island as a sovereign nation and not part of Chinese territory.

China often hits out at visits like Beer’s, with government statements blaming foreign politicians for “sending false signals” to advocates of Taiwan independence.