She made the statement on Saturday in her testimony at the resumed sitting of the Lagos State Judicial Panel on Restitution for victims of SARS and other related matters.

At a previous sitting, the witness told the panel that she was at the protest ground in Lekki every day, coordinating some of the activities and she was an eyewitness to the shooting on the night of October 20, 2020.

The panel is racing against time after it got a three-month extension to complete the hearing and give decisions in the 235 petitions it received from the public.

To make up for some of the time lost to the Easter holidays, the panel listed 17 cases for hearing on Saturday as opposed to about 10 to 12 it usually hears at a sitting.

Channels Television gathered that of the 235 petitions received by the panel, there were 14 cases related to the Lekki shooting. 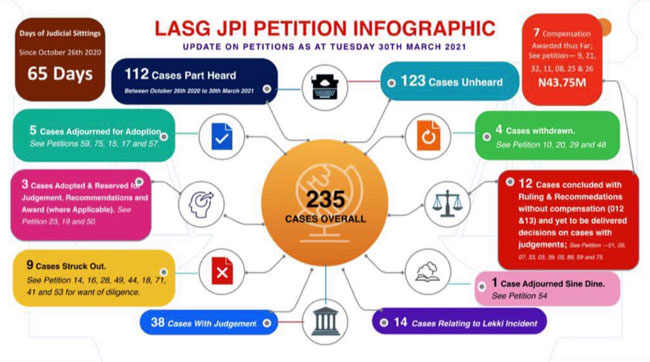 Led in evidence by her counsel and a Senior Advocate of Nigeria (SAN), Yinka Olumide-Fusika, Serah, who described herself as a freelance auditor continued her testimony of the events of the night on Saturday.

She tendered in evidence two flash drives containing photos and videos that suggested that the Lekki Concession Company (LCC) had more visuals in its custody capable of revealing what exactly transpired on the night of the incident.

The evidence, according to her, suggested that the LCC had more cameras on the ground on the night of the incident to show what really happened during the Lekki shooting.

The witness told the panel that over five different cameras were on the ground, but most of them have now been removed.

She went on to give a very lengthy narration of how soldiers shot at protesters, as well as the activities of the Divisional Police Officer (DPO) and some operatives of the Maroko Police Station who she claimed also shot at protesters.

This was the live one (bullet) that was cocked in front of me; I picked it myself,” Serah said.

She also alleged that a hospital refused to release information about some of the protesters receiving treatment after the shooting at the Lekki toll gate.

After giving her testimony, the panel

admitted in evidence some bullets which the witness said she picked from the floor during the shooting.

It also granted the request of Serah’s lawyer to summon the Director of Hospital Administration and HR of the Lagos State University Teaching Hospital (LASUTH), Mr K. F. Gbajumo, who allegedly issued a memo prohibiting his staff from giving out information on the victims.

On the next adjourned date, the witness is expected to play more of the videos

she gathered on the night of the incident to further prove her narration of the events of the shooting at the protest venue.