The Phase 3 trial will recruit 30,000 participants in the US, with half to receive the vaccine at 100 microgram dose levels, and the other half will receive a placebo.

It is designed to learn whether the vaccine can prevent infection by the SARS-CoV-2 virus, or, if people still get infected, whether it can prevent the infection progressing toward symptoms.

If they do get symptoms, the vaccine can still be considered a success if it stops severe cases of COVID-19.

The study should run until October 27, according to its page on clinicaltrials.gov.

The announcement came after the New England Journal of Medicine on Tuesday published results from the first stage of Moderna’s vaccine trial, which showed the first 45 participants all developed antibodies to the virus.

Moderna is in pole position in the global race to find a vaccine against the coronavirus, which has infected more than 13.2 million people and killed 570,000.

China’s SinoVac is also at an advanced stage, Phase 2, while the Russian news agency TASS has announced Russian researchers have completed clinical trials on a vaccine, though they have not shared data.

Scientists caution that the first vaccines to come to market may not be the most effective or safest. 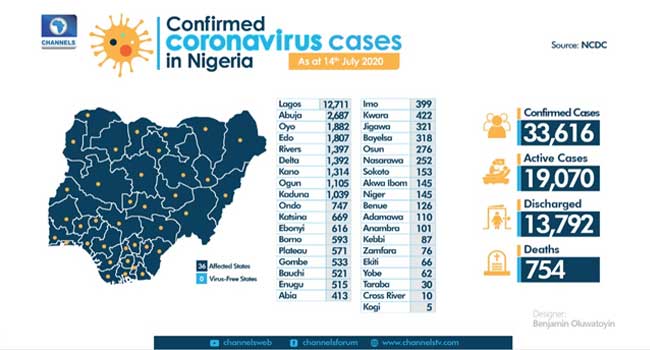 The Moderna vaccine belongs to a new class of vaccine that uses genetic material, in the form of RNA, to encode the information needed to grow the virus’ spike protein inside the human body, in order to trigger an immune response.

The spike protein is a part of the virus it uses to invade human cells, but by itself is relatively harmless.

The advantage of this technology

is that it bypasses the need to manufacture viral proteins in the lab, shaving months off the standardization process and helping to ramp up mass production.

But no vaccines based on this platform have previously received regulatory approval.