Justice Salami in a statement signed by himself on Tuesday said he has no cause to regret chairing the commission of inquiring investigating the suspended EFCC Chairman.

“My attention has been drawn to the false and mischievous reports circulating in the media about my purported regrets as Chairman of the Judicial Commission of Inquiry investigating the suspended Acting Chairman of the EFCC, Ibrahim Magu.

“Ordinarily, I would not have dignified the purveyors of this falsehood with any form of rebuttal, but the need to put the records straight and expose their barefaced lies has necessitated my response.

“No claims can be further from the truth than the outright falsehood contained in the said report.

“I have no cause to express any regret over my Chairmanship of the Commission, not to talk of betraying any form of emotion before anyone about it”.

Justice Salami rather noted that he accepted the appointment with honour and diligence, describing it as a call to service.

I see my appointment to serve as the Chairman of the Commission of Inquiry as an honour and call to service, thus my decision to accept diligently and patriotically discharge this responsibility,” he said. 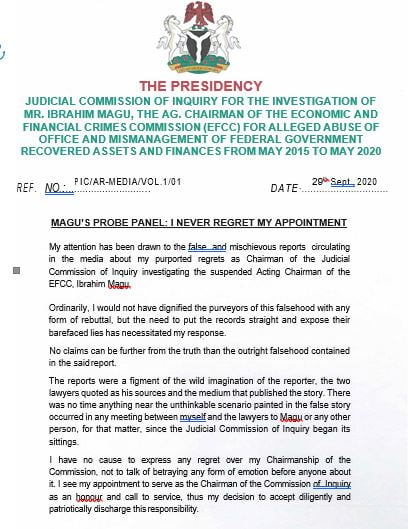