After 30,000 Frankfurt fans managed to get tickets to Camp Nou for the quarter-final win away to Barcelona, Eintracht fans are expected to return to Spain in large numbers again for the final against Scottish giants Rangers.

Airlines Lufthansa and Eurowings announced Friday they are adding eight additional flights from Frankfurt and seven from Munich to Seville and Jerez on the day of the final. 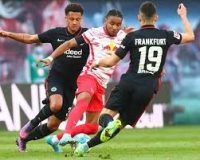 A 1-0 win over West Ham in Thursday’s semi-final second leg sealed a 3-1 aggregate victory to put Frankfurt in their first European final in 42 years.

“Everyone who was able to be there will never forget it for the rest of their lives,” Frankfurt coach Oliver Glasner said after fans celebrated with players on the pitch after the final whistle.

“I was home at four, but back in the office by nine,” Glasner added on Friday, after a night of partying in Frankfurt.

Eintracht are mid-table in the Bundesliga and have largely saved their best performances this season for the Europa League.

Glasner spoke of “an atmosphere in the city that carries you away, that makes the players perform at the top level” after Frankfurt beat Barcelona and West Ham on the path to the final.

A victory in Seville would see Eintracht qualify for the Champions League for the first time. The club finished runners-up to Real Madrid in the European Cup in 1960.