In an effort to push forward an environmental agenda stalled by an unsupportive Congress and a conservative Supreme Court.

Biden — who will deliver his address from a former coal power plant in Massachusetts — will make clear that time is running out to tackle global warming, highlighted by a devastating heatwave in Europe that has sparked fires, melted runways and spelled misery for millions. 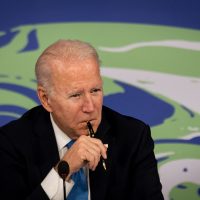 But he will stop short of declaring a formal emergency, which would grant him additional policy powers.

“The president… is going to make it clear that just because Congress couldn’t get it done, he is going to move forward with every power available to him to make the change and the shift to clean energy,” White House climate advisor Gina McCarthy told CNN.

“The president will make very clear again that this is an emergency and we are going to act. But the president is going to outline that at his pace.”

For now, he is expected to use executive orders to provide additional funding for communities dealing with extreme heat and actions to boost US production of wind power.

The efforts are part of the administration’s goals to move “the US power sector away from the pollution, environmental injustice, and volatile price swings of the past,” a White House official said, and “toward the good-paying jobs, lower costs, and energy security of the future.”

Biden began his term last year promising to fulfill campaign pledges to tackle the global climate crisis, but his agenda has faced blow after blow.

His first day in office, Biden signed an executive order to bring the United States back into the Paris Climate Agreement, followed later by an ambitious announcement that he was targeting a 50-52 percent reduction from 2005 levels in US net greenhouse gas pollution by 2030.

But his signature Build Back Better legislation, which would have included $550 billion for clean energy and other climate initiatives, is all but dead after failing to receive the necessary backing in Congress as Democratic Senator Joe Manchin said he would not support the bill.

McCarthy insisted however that “regulatory action is still strong,” saying: “We are going to move, not just with the EPA, but with others.”

The Biden administration has framed climate policies as a national security issue, made all the more urgent by soaring fuel prices in the wake of Russia’s invasion of Ukraine.

“Not only does it affect our infrastructure… It has an impact on our readiness,” White House spokesman John Kirby said Tuesday.

“We are committed to taking advantage of this moment and doing everything we can, including on the world stage,” Price told reporters, “to ensure that this decisive decade does not go by without us taking appropriate action.”